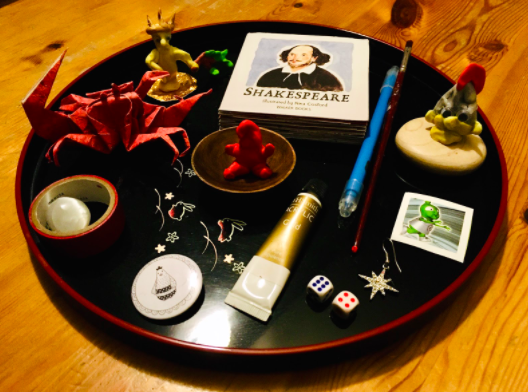 “What’s this?” I held up a rather squashy-faced, plasticine-crafted figure up to the camera. An awkward pause. “A chicken?” one student tentatively asked. After a fair amount of giggling, it was determined to be an “armed head” – one of the three “apparitions” shown in Act 4 of Shakespeare’s play, Macbeth.

In the time Grade 9 English classes have spent together – despite being physically apart – we have continued to explore and learn from Macbeth. This is a class where you always need to have a notebook on hand, not just your laptop open. Students have crafted theme tracking charts, character logs and expressed conceptual understanding through their free writing. Entertaining moments have included learning new dramatic terms (now, it’s possible to form a dramatic aside instead of merely whispering to a friend or furiously muttering to oneself!) and acting out dramatic scenes from the play with improvised household props.

More recently, I played a version of ‘Kim’s Game’ with my classes. This quintessentially British game emerged from Rudyard Kipling’s 1901 tale, Kim in which the protagonist’s memory is tested in his spy training. The three apparitions made an appearance (sadly not a ghostly one) among the bric-a-brac of the game. We used the activity as a warm-up to develop curiosity and engagement in the visual theatricality of Shakespeare’s play. This was also a continuation of tracking the supernatural in Macbeth and extending students’ creative thinking. As we complete our studies, they will move from thinking as theatre directors of Macbeth to analysing the creative decisions made in some of its film adaptations.